What are the health benefits of cocoa powder?

Cocoa is having a bit of a moment. As the newly emerging superfood, it may come as a surprise that health gurus are encouraging people to incorporate more of it into their diet. However, this doesn’t mean that reaching for your favourite chocolate bar will provide you with the wealth of benefits that have got people talking!

Cocoa powder originates in the tropics of South America, where the small, evergreen Theobroma cacao tree is native. Thriving in the shade of taller tree species, around 5% of the Theobroma cacao’s flowers are pollinated, creating egg-shaped pods that house its seeds. Although a large portion of these seeds are eaten by animals living in the jungle, those that are left begin to ferment, becoming cocoa beans in the process.

Although it would be over a thousand years before cocoa beans were used to make chocolate in the way you may know it today, the beans were found to be edible as far back as 2,000 years ago. Dating as far back as 400 B.C, cocoa beans have made an appearance in the Mayans hieroglyphics, have been used as currency by the Aztecs and used exclusively by royalty, before being discovered by Colombus in 1502.

Cocoa beans are largely composed of fats, with as much as 53% of the bean made up of cocoa butter. However, to create the powder, the remainder of the edible beans are ground together, creating a product that is much lower in fat but rich in flavour, while making the perfect alternative to cooking chocolate that you may typically use for baking.

What are the health benefits of cocoa powder? 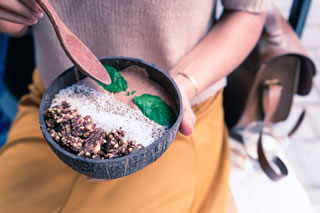 So, why is it that people are recommending cocoa powder for its health benefits? “We've always believed that cocoa was good for the soul, but now there is evidence highlighting that it's good for our health too”, Joel from The Nutrition Guy states. “There is some evidence showing that cocoa, in particular, the flavanols found in cocoa, acts as an anti-inflammatory effect in the body. Furthermore, some studies have shown that cocoa can reduce blood pressure in those people with hypertension (high blood pressure).”

Flavanols are found in a host of plant-based foods, with cocoa beans having four flavanols naturally-occurring in them. These are unique to the bean and come with a host of benefits. It is because of these properties that Joyce from A Dietitian’s Mission uses cocoa “nearly every day” due to their “amazing antioxidant and anti-inflammatory effects”.

When it comes to thinking about your diet, including as many antioxidants as possible is extremely important, which is why it is so great that cocoa powder is rich in these. “The effects of the multiple antioxidants in cocoa include improved vascular function, decreased blood pressure, improved insulin sensitivity, reduced inflammation, and free radical scavenging”, Kaleigh from the Lively Table tells us. Every day, your body comes under attack from free radical electrons, whether that’s through the food that you have chosen to eat or being exposed to smoke from cigarettes; these free radicals have been associated with a range of diseases, including Parkinson’s and cancer. Antioxidants work to destabilise these electrons, making these less damaging to your body.

“Cocoa, as long as it is high-quality and minimally processed, can benefit everyone”, Joyce tells us. “High-quality cocoa consumption has been linked with improving blood pressure, lowering the risk of heart attacks and forming part of a more controlled sugar intake. Some studies have shown cocoa's positive effect on blood flow, meaning that cocoa may especially benefit those with high blood pressure or those who may be at a higher risk of heart attacks or strokes. It also has effects which may also improve blood flow, as it can help relax and dilate arteries and blood vessels - this can help control high blood pressure, improve brain function and improve your mood.”

The difference between cocoa powder 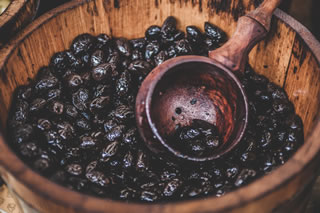 Cocoa in all its forms starts off with the same amount of valuable properties that we look to introduce more of into our diets. However, the processing can vary from bean-to-bean, meaning that some end products offer a higher percentage of the “good stuff” that you may be looking for.

The beans in their raw state are often referred to as cacao beans and can be found in a number of health food shops. As these haven’t been processed in any way, these are your best bet if you’re looking to get the most out of the bean. Aside from its antioxidant properties, Kaleigh tells us that “cocoa powder is an excellent source of fibre, with almost 2g per tablespoon”. What’s more is that they are rich in nutrients such as magnesium and calcium, as well as being packed with a myriad of different bonuses.

Chocolate is most commonly associated with this superfood and is a favourite amongst people looking to unwind. However, the way in which it is processed means that the benefits are greatly reduced. Here at Titanic Spa, we offer a range of relaxing spa breaks in Yorkshire that are the perfect alternative, allowing you to take care of yourself both inside and out.

The Dietitian’s Mission advises that “the processing and heating of cocoa can actually decrease its flavanol content by 60% - meaning a loss in its beneficial properties”. This is typically found as a result of Dutch Processing, a method in which the powder is stripped of its acidity to create a sweeter flavour that is frequently found in store-bought chocolate. Cocoa powder that hasn’t undergone thorough washing of its acidity is also readily available. However, when baking with this, natural cocoa powder often needs to be paired with baking soda to prevent any reactions from happening due to the acid levels.

How can you add cocoa powder into your diet? 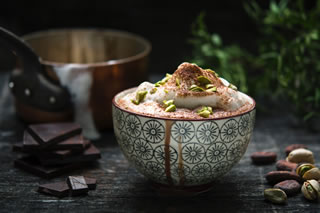 While cocoa powder comes with a variety of advantages that you should consider adding to your meals, the way in which you introduce this food to your diet is also important. Joel from The Nutrition Guy recommends cocoa powder to be used in a number of different ways. “Add it to drinks, smoothies, desserts or combine it with chia seeds to make a delicious and nutritious chia pudding. The culinary options are endless. Just remember that a little goes a long way!”

Joyce also finds that one of the easiest ways to ensure that you are incorporating cocoa powder into your diet is by mixing it into your favourite recipes. “I use high-quality cocoa in smoothies, in avocado mousse, or by simply stirring it through natural peanut butter to make a 'chocolate spread'. I also enjoy eating a small amount of 85% dark chocolate with strawberries as an after-dinner dessert.”
“It's important to remember that while one ingredient may be healthy, it alone cannot be the ‘magic pill’ or ‘superfood’ to make you achieve optimal health. Something like cocoa powder should be a piece of the puzzle, not the whole puzzle”, Laura from The Sassy Dietitian informs us. So, the next time you find yourself craving something sweet, why not opt for a cocoa-based product?